Explorations, investigations, discoveries, collaboration and more! St Luke’s Catholic Early Learning Centre has been open for one month and the days have been filled with play based learning opportunities. The children are supported in investigative play inquiries, becoming more familiar with their new environment, making new friends, forming relationships with their teachers, and practicing their self- help skills as they settle into their new surroundings. Our role in play is essential to support children’s investigations and learning. 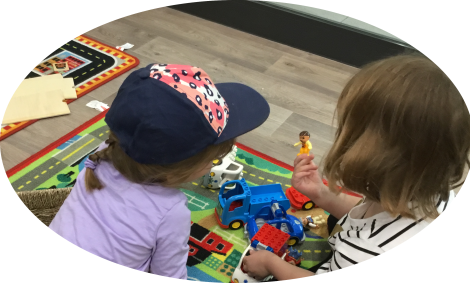 Children are motivated to become involved in play, making it an ideal means to creatively express their thoughts, knowledge and ideas, as well as offering a means for the extension of children’s knowledge.

Imaginatively expressing their ideas and knowledge in their play, children are forming the foundation for the development of learning dispositions as they begin to see themselves positively as an active learner. Children practice behaviours which support their learning across all areas including risk taking, working with others (sharing play space and materials,) expressing their thoughts and ideas and becoming more familiar with the use of technology to support their inquiries.

“What children learn does not follow as an automatic result from what is taught, rather, it is in large part due to the children’s own doing, as a consequence of their activities and our resources.”
Loris Malaguzzi (1993) The Hundred Languages of Children 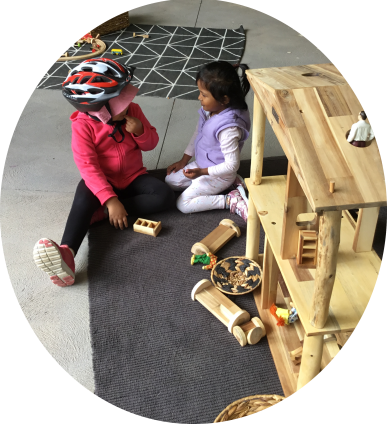 A teacher’s role in play varies over time and needs to be carefully considered. From their observations of children’s play, teachers reflect on the children’s interests, their current knowledge and strengths and the possibilities for further extension. This requires careful consideration, balancing the guiding of a child’s inquiries whilst supporting their sense of agency and independence. A flexible and adaptive approach supports this intentional teaching as described by the Early Years Learning Framework (EYLF, 2009)

Educators move flexibly in and out of different roles and draw on different strategies as the context changes. They plan opportunities for intentional teaching and knowledge-building.

This involves educators being deliberate, purposeful and thoughtful in their decisions and action. Intentional teaching is the opposite of teaching by rote or continuing with traditions simply because things have ‘always’ been done that way. 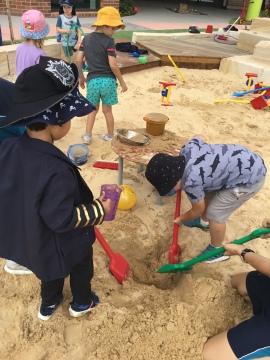 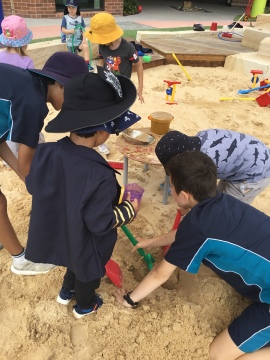 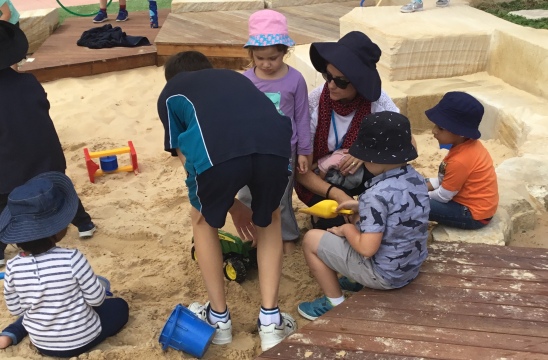 Parallel play facilitates communication and collaboration between children as they  negotiate the sharing of the space, materials, their thoughts and ideas. Over time, parallel play can develop into cooperative play where the children are more interactive as they collaborate and communicate guiding the direction of the story in their play.

Parallel play transitioning to cooperative play was observed in the sandpit at St Luke’s CELC last Friday when we had some visitors from the older children from St Luke’s College. Initially, the younger children were hesitant and unsure of how to interact with the older children. It was interesting to watch the play behaviours develop over a short time period.

The interactions between the two groups of children began in the sandpit. The younger children sat beside me, watching the older children  and playing on their own, filling tip trucks with sand. One of the older children observed this interest and brought over a tip truck which he proceeded to fill with sand, another of the older boys came to assist. I prompted one of the younger children ” Where would you like the trucks to go?” Alex (*) responded ” On the track. It (the truck) needs to be empty over there!” (Alex lifted his hand and pointed towards the outer edge of the sandpit)

Alex’s suggestion inspired the older boys to create a track across the sandpit using spades. This action prompted more of the CELC children to join in the play. After watching the older boys build the track and filling his truck with sand, Alex left my side and went to assist the older boys. Keen to further extend the play, Alex showed his CELC peers how the tip trucks needed to be filled so the older boys could transport them across the track.  This play continued for another 15-20 minutes as the older and younger children cooperated together to fill the tip trucks, transport them across the sandpit track, then empty the trucks. More intricacies were added to the play as more children became involved, this included use of the water pump for truck washing purposes.

It could be said that the mathematical concepts of volume and mass were explored as the tip trucks were filled with sand and then water.  Scientific concepts of trial and error, hypothesising and the concepts of force and motion were also investigated through the use of the tip trucks and water pump.  What was most evident for me in this cooperative play in the sandpit, was communication and collaboration between all of the children (young and old.)

Play was a conduit to facilitate the children’s interactions as they worked together to guide the direction of the play in the sandpit. The children respected and valued each other’s contributions, they engaged in turn taking in conversations, while exploring mathematical  and scientific concepts. The visit was a great success!

A big thank you to the children from St Luke’s who visited last week. We look forward to seeing you at St Luke’s CELC again soon.

One thought on “Playing a role in play….”